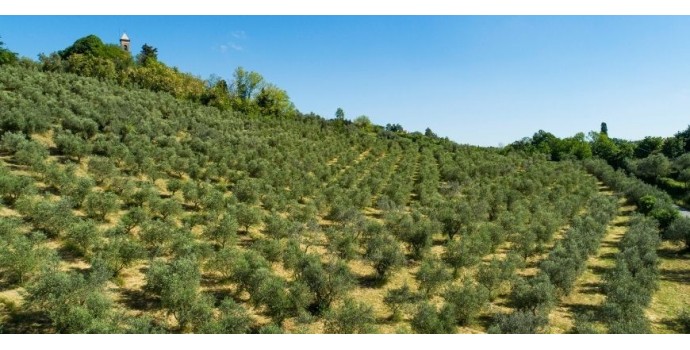 Despite having a modest production of olive oil, Emilia Romagna is one of the most interesting regions in the production of this product, because it is capable of differentiating itself. In the territory there is in fact also a tourist connotation, as well as commercial, linked to olive oil.

The characteristic presence of the olive tree immersed in the microclimate of the hills of Romagna sloping towards the sea is an important landscape value and keeps alive the biodiversity of the area, contributing positively to the economic, tourist and environmental aspects.

The region produces more extra virgin olive oil (EVO) than any other oil, which is the healthiest that can be consumed today, even though it is not among the main crops of the territory.

In the region have been classified, according to the agronomic characteristics and properties of the oils produced, 24 cultivars, of which 12, are autochthonous cultivars of Romagna.

The main varieties of cultivars present in the region are: Correggiolo, Leccino, Rossina (or Selvatico) in Rimini and Forlì-Cesena; Nostrana, Ghiacciola and Colombina in the area of Brisighella (Ravenna).

A region which historically has a long tradition of olive oil production, dating back to the Roman Empire and which accompanies us to the present day while maintaining its characteristic distinction. The discovery of some strains of secular plants shows, in fact, that the olive tree and the culture of oil were already widespread in these areas for a long time, as evidenced by the wide use in local cuisine.

Emilia Romagna proves to be a flagship in the industry, showing how it is not so important the quantity but the quality, which translates into care and development of its niche, thanks to which it has distinguished itself over the years.

To concretely prove the advantages deriving from this kind of business choices we have the longevity of local producers and in particular realities such as Oleificio Sapigni, able to carry on a centuries-old tradition and to update it to the current needs, keeping a careful eye on the quality of processes.

In line with its idea of diversification, the Emilia Romagna region welcomes several Slow Food Presidia. In detail, Slow Food is the organization that promotes local production and cuisine with the aim of preventing the disappearance of local food cultures and traditions, counteracting the rise of the "fast life" and combating the decline in people's interest in the food they eat. Reading the Slow Food label means being certain that the work behind the product is carried out in accordance with an ethical principle, that is, ensuring the accessibility of good, clean and fair products.

In particular, in the vast assortment of the Oleificio Sapigni catalog, we find the "Colle Natio" oil, an organic extra-virgin oil extracted from olives of the local cultivars of Romagna and the "Colle Natio dei Centenari", an organic extra-virgin oil, recognized as a Slow Food Presidium, produced from over one hundred years old plants of its own farm.